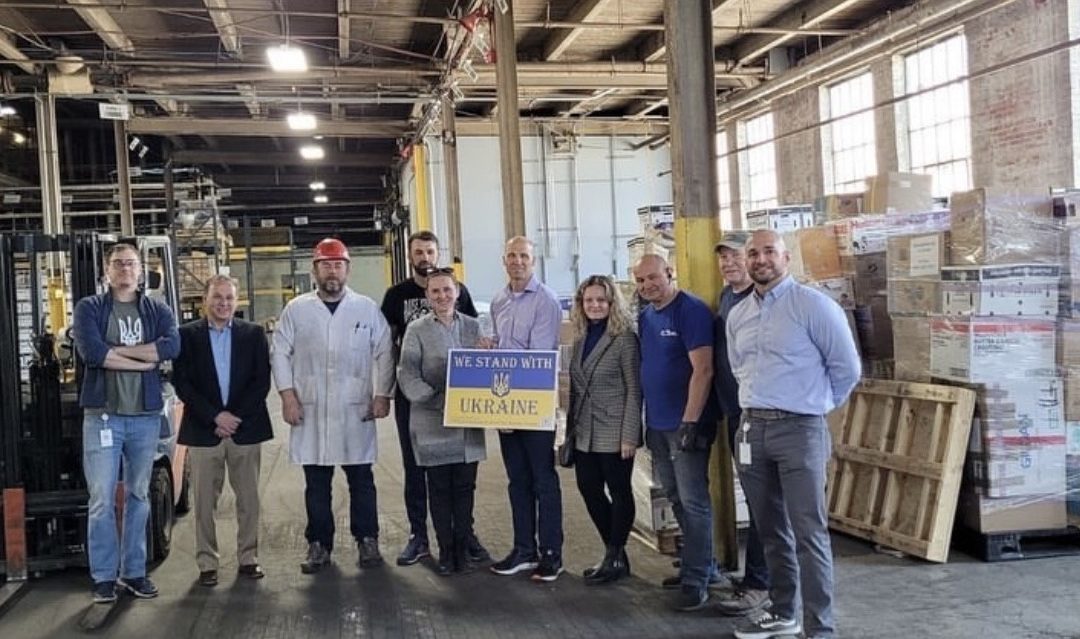 It started small, what they called a “suitcase brigade,” but then the small war relief effort changed.

It was when David Plimpton, Chief Executive Officer of INOLEX, saw how their team member, Slava, of Ukrainian descent, was directly impacted by the fighting in Ukraine, as his family member, Alex, was barricaded outside Kyiv while fighting for his country, and his life.

INOLEX, a designer and manufacturer of sustainable ingredients for health, beauty, and wellness, has been in operation for 146 years, but never in its long family-owned business history has it been swept up into a real life-and-death humanitarian crisis.

Alex was on a live FaceTime call with David in the company’s conference room, along with Alex’s brother-in-law Slava, an INOLEX Chemist. It didn’t seem possible to just call up the war started by Russia’s invasion of Ukraine earlier this year, but there it was, live on video.

“We couldn’t believe we were watching an immediate relative of one of our team members huddled in basement, with sandbags, holding a weapon, defending his country, fighting for freedom,” said Plimpton. “It made the reality of war real, and we decided then we needed to do more to support our local and international community.”

“Companies like INOLEX are family businesses whose success is at the very core of our country’s success,” said , President of Family Enterprise USA (FEUSA), an organization that promotes family enterprise growth. “They not only support their employees, their community, but in this case are reaching out to help those displaced and suffering from a painful war, a war hitting their valued employees directly.”

Philadelphia is home to the second largest Ukrainian American population in the U.S. INOLEX, a large family enterprise based here since 1876, and a member of FEUSA, has for decades employed many talented Ukrainian Americans in its chemical labs, offices, and warehouses.

“Our team is our greatest strength,” said David Plimpton. “Much of our success has come through the innovations created by our chemists, many of whom are very talented American Ukrainians. We value their expertise tremendously. Our support of the Ukraine community, and our collaborative approach as an organization, is indicative of how we do things.”

The company began working alongside the newly formed American Ukrainian Relief Association (AURA), a small, but hardworking group of Ukrainian families living in the Philadelphia area, some of whom work for INOLEX. They are part of a growing network of American Ukrainian relief organizations pulling together quickly to help their motherland from collapse.

It started with the “suitcase brigade.” The idea, according to Jeremy Plimpton, INOLEX Interim Coordinator, Direct Aid to Ukraine, was to support the Ukrainian community by gathering clothing, food, medical supplies, diapers, anything of use, and packing them into suitcases for individuals to fly to Warsaw for eventual delivery to Ukraine’s neediest refugees escaping the war’s horrors. He called this a “micro-packaging” effort.

“We saw firsthand the immediate impact of the war on our team and had to do more,” said Plimpton. “We offered our warehouse space and began receiving trailers filled with humanitarian aid. The warehouse quickly filled with hundreds of pallets of aid.”

AURA was gathering supplies from its suburban Philadelphia base in Warminster, loading trucks to deliver items to INOLEX warehouses. Once the hundreds of pallets of supplies were assembled and shrink-wrapped, the INOLEX and AURA team trucked the supplies to seaports and to airports for delivery to Warsaw, and eventually to Kyiv, Ukraine, and the interior front lines.

“The critical issue was making sure that on the other side, black market operators did not intercept the supplies and sell them on the open market,” said Plimpton. “We are working very hard to make sure the relief gets directly in the hands to those Ukrainians most in need.”

The actual supplies were many and varied.

INOLEX, as a global specialty ingredients company, knows how to pack, warehouse, and ship a variety of materials and products.

The company sees the volume of aid increasing each week and the Plimptons believe they are just getting started in this effort. Fortunately, last month, Alex, brother-in-law to INOLEX Chemist Slava, returned home safe and unharmed. But the fight and the relief effort continue.

INOLEX is also helping raise funds for AURA by being a founding sponsor of the group and by creating a matching funds program. To date the program has increased $50,000.

Family enterprises, like INOLEX, contribute more the $7.7 trillion dollars to U.S. GDP and research shows they tend to hold on to their employees longer and treat them better than the non-private sector workplace, according to new research by Family Enterprise USA. There are 32 million family businesses in the U.S, 75% of which have been around for 30 years or more, just like INOLEX.

“The solidity of America’s family businesses may have something to do with employees sticking around in tough labor markets,” Soldano said. “Often a strong work force is built on more than just pay, it is built on what companies give back and how they support their staff. INOLEX is a heroic example of this.”

About INOLEX
INOLEX is a global company that designs and manufactures sustainable ingredients for the beauty and personal care industries. It is based in Philadelphia, United States, and has been operating since 1876.