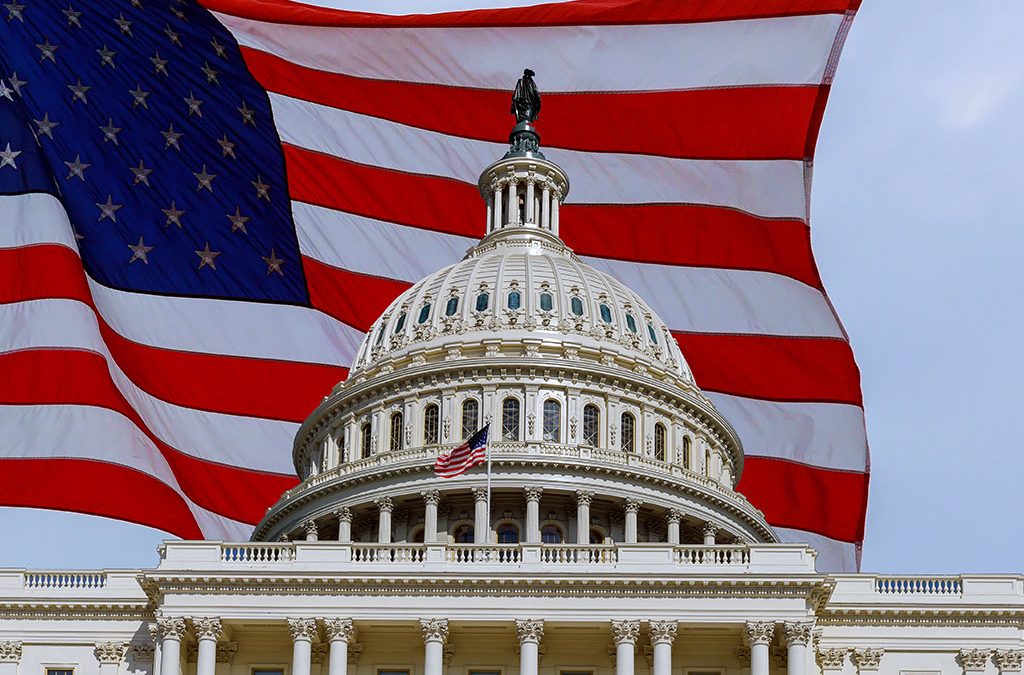 Election Results Update: With the results of the midterm election almost final, control of the House and the Senate in the 118th Congress is clear. On the House side, Republicans are poised to win the remaining two outstanding congressional races, giving the GOP a 222–213 margin. Though this Republican victory in the House was expected, it fell short of the “red wave” scenarios that had been forecasted by both the media and Republican leadership in the lead-up to the election.

On the Senate side, Democratic incumbents ultimately proved successful in Arizona, Nevada and New Hampshire. In conjunction with a victory by Sen.-elect John Fetterman to flip the seat of retiring Sen. Pat Toomey (R-PA), Democrats have retained control in the Senate with a victory of at least 50 seats. On Dec. 6, Georgia is set to hold a runoff election for the seat of incumbent Sen. Raphael Warnock (D-GA), who is running against Republican Herschel Walker. While Democrats do not need to win this seat to ensure a majority in the chamber, a victory in Georgia would allow moderate members of the party, like Sen. Joe Manchin (D-WV), to vote against some confirmations and legislation without derailing the efforts completely.

Democrats’ Transition to Regulatory Agenda: Without control of the House, the Biden administration will likely curb its legislative agenda as they turn to executive action and the regulatory process to enact meaningful change. On Nov. 4, Lily Batchelder, Treasury assistant secretary for tax policy, published the agency’s Priority Guidance Plan for the 2022-2023 tax year, previewing the administration’s tax regulatory agenda for the 118th Congress.

Included in the 205 proposed guidance objectives were projects to renew focus on limiting “aggressive” estate planning tactics as well as to clarify the taxation of digital assets, including cryptocurrency. The plan also includes a host of projects to implement the new Inflation Reduction Act (IRA) energy provisions, providing an opportunity to press the boundaries of the Treasury Department’s regulatory authority and resolve ambiguities in favor of the administration’s climate change agenda. On Oct. 14, the IRS also announced the start of 2024 as the tentative deadline to publish all final regulations concerning provisions included in the Setting Every Community Up for Retirement Enhancement (SECURE) Act that was signed into law in 2020.

Of course, the Treasury Department’s ability to pursue a broader regulatory agenda may be somewhat curtailed by the fact that it must also release guidance on a host of recent legislation, including the new corporate book profits minimum regime and stock buyback excise tax, all while struggling with staff shortages. To date, the Treasury Department has released almost no information on a potential timeline for when the public may expect guidance concerning most of the IRA’s tax provisions.

Apart from the proposals expected to be considered in the upcoming lame duck (see Legislative Lowdown section below), there are a few policy objectives that a divided Congress may pursue in the new year. With a one-seat majority, Senate Majority Leader Chuck Schumer (D-NY) will seek to pass less controversial bills on a bipartisan basis, similar to what he accomplished with the CHIPS and Science Act and the Infrastructure Investment and Jobs Act (IIJA). Taking advantage of a split government, Republican leadership will be hesitant to support any legislation that may give the Biden administration an economic victory before the 2024 presidential elections. As a result, there is unlikely to be any significant bipartisan fiscal or tax legislation signed into law in the 118th Congress.

2023 House GOP Agenda: With split control of Congress, neither party can pursue partisan budget reconciliation legislation. Instead, House Republicans will pursue their tax agenda through piecemeal legislation and hearings.

House Republicans’ Commitment to America plan will likely be the foundation of the tax agenda, with a focus on tackling inflation, addressing issues with the supply chain, addressing high energy prices, helping small businesses, and creating new and bolstering existing tax incentives for hard-hit industries. In recent weeks, Republican members of Congress and their staff have suggested that the party may be less supportive of big corporations and traditional financial institutions than in the past. This shift comes as a Pew Research Center study on Nov. 17 found that public support from Republicans for large corporations, banking entities and technology companies has nearly halved over the last two years.

From an oversight perspective, the House Ways and Means Committee will likely hold hearings on various proposals to tackle these issues, potentially stitching proposals together into a package that addresses affordability and inflation. A GOP-controlled House will also focus on several specific oversight issues, many of which have already been announced by Republicans in recent weeks. This includes increased scrutiny against tax-exempt entities, such as private universities, tax practices of donor-advised funds and broad monetization allowances afforded to certain direct pay and transferable credits in the IRA. The committee will also examine the economic effects of various new policies in the IRA, from the new book-minimum tax to the domestic content and apprenticeship requirements in the energy tax provisions.

House Republicans will also focus on various proposals to recalibrate the $80 billion of new IRS funding provided in the IRA. House Republican Leader Kevin McCarthy (R-CA) has signaled that limiting the use of these funds will be an early and major priority. Besides oversight hearings related to the IRA, Republicans will also go after ESG guidance released earlier this year by the Securities and Exchange Commission (SEC). However, the House Financial Services Committee will have primary jurisdiction over this issue.

One of the biggest focal points for the committee under Republican control will be investigations into the alleged criminal tax practices of Hunter Biden and his family, as well as challenging Treasury Secretary Janet Yellen’s representation of U.S. interests in recent negotiations over the proposed global minimum tax. Leading up to the 2024 elections, this will likely increase in intensity as attempts are made to uncover more alleged abuses of power. As recently as last week, McCarthy noted that these investigations will be at the top of the priority list for the party.

2023 Senate Democratic Agenda: With only control of one chamber, Senate Democrats will likely be unable to pursue the remainder of Biden’s partisan tax objectives in the 118th Congress. Instead, the Senate Finance Committee will primarily focus on investigations and confirmation hearings.

Under the leadership of Sen. Ron Wyden (D-OR), the current chair, the committee will continue to scrutinize the profits of fossil fuel companies, pharmaceutical manufacturers and the perceived unfair tax practices perpetrated by insurance providers, private equity and multinational corporations across several sectors. Wyden is also likely to continue to hold hearings to consider implementing a global minimum tax, a tax on the wealth of high-income individuals or levies against highly profitable oil and gas companies. However, without control of the House, there is no chance that this legislation will receive serious consideration in the 118th Congress.

Several committees in the chamber will also hold hearings to highlight the successes of the IRA, IIJA and other legislation passed in the 117th Congress. These hearings may help develop strategies for agencies allocating the funding provided by these bills.

The Democrat-controlled Senate is likely to increase focus on confirming federal judges and members of executive agencies. Notably, the recent influx of funding to the IRS and Treasury Department will require several new confirmations of high-level positions. Control of the Senate will ensure that these positions can be filled in a timely manner. Speculation has also arisen over the possibility of Yellen retiring in the next year. If this occurs, Democratic control over the Senate will allow for a simple transition of power to a new Treasury secretary.

Senate Finance and Ways and Means Updates: On the Senate side, there are unlikely to be any significant changes to the leadership of either party. This means that Wyden and Ranking Member Mike Crapo (R-ID) will likely retain their top spots on the committee. If Democrats win the runoff race in Georgia, they will likely be able to add one more member to the committee, shifting the ratio in their favor. Republicans will also be required to fill several high-profile vacancies on the GOP side of the committee created by the upcoming retirements of Sens. Richard Burr (R-NC), Rob Portman (R-OH), Ben Sasse (R-NE) and Pat Toomey (R-PA).

On the House side, current Ways and Means Chair Richard Neal (D-MA) will remain the top Democrat on the committee in the upcoming Congress. With the imminent retirement of the current top Republican, Kevin Brady (R-TX), three Republicans are currently locked in a battle for committee chair. The members vying for the spot are Reps. Vern Buchanan (R-FL), Adrian Smith (R-NE) and Jason Smith (R-MO). While Buchanan was generally considered the frontrunner early in the race, Jason Smith has recently been gaining ground. Adrian Smith is largely viewed as the least likely of the three to take control, but as a respected contender, he may be picked if a compromise candidate is required. With control of the committee, many new Republican members will also be added to the committee in place of current Democratic members.

To read the full report and more details please click.

About Brownstein Hyatt Farber Schreck
Brownstein Hyatt Farber Schreck is a unique law firm. Walk into any of our offices and you’ll immediately recognize a different type of energy. Complacency doesn’t have a place here. Flexibility and inspiration do. Our culture and enthusiasm allow our attorneys, policy consultants and legal staff to stay ahead of our clients’ needs and provide them with the resources they require to meet their business objectives.