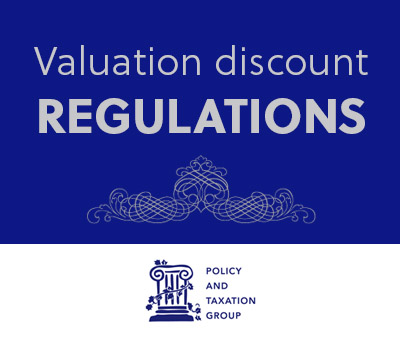 PATG continues to monitor the anticipated year-end release of Treasury regulations under Section 2704 that could place limits on the availability of valuation discounts.  As you are aware, PATG worked closely with our Congressional champions over the last year to communicate opposition to any aggressive and unilateral regulatory actions that would substantially increase the estate tax burden on family enterprises.  Such advocacy efforts have been successful – in a recent positive development, Treasury officials signaled through public statements in November 2015 that the proposed regulation will not follow recent Administration proposals to disregard transfer and liquidation restrictions in the valuation of intra-family transfers, but will be more focused on technical changes to the underlying statue.  We will continue to inform you on the timing and substance of any proposed regulations.

Finally, with respect to the prospect of comprehensive tax reform, it is notable that Congress and the Administration recently approved tax legislation that would make permanent extensions of the federal research credit, business expensing under Section 179, the child tax credit and the Earned Income Tax Credit. As a result of these permanent extensions, the prospects for a tax overhaul are significantly enhanced as the budget baseline will be reduced by more than $600 billion over the next decade. As we look forward to 2016 and the Presidential and mid-term Congressional elections, PATG will continue to drive the estate tax reform advocacy effort and ensure that this issue remains a priority with key lawmakers.