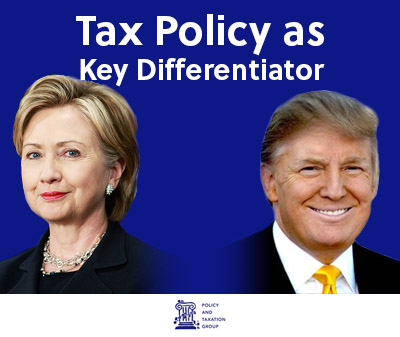 With the Republican Convention coming to a close and the Democrat Convention opening next week, tax policy continues to be a key differentiator between the Presidential candidates.
Donald Trump proposes to reduce the existing seven individual tax brackets to three, with the top rate falling to 25% from 39.6%, while the corporate tax rate would be dropped to 15% from 35%. The estate tax would be completely repealed. The Tax Policy Center  has estimated that the plan would reduce federal revenue by $9.5 trillion over 10 years, but Trump has countered that the revenues would be replaced by eliminating a range of tax loopholes and an improved economy resulting from a more favorable tax environment.
Hillary Clinton by contrast would raise taxes across the board on high-income households with nearly all of the increases targeted to the top 1% of taxpayers. Her platform calls for reinstating the estate tax at 2009 levels (an exemption of $3.5 million with no inflation adjustment and a top rate of 45%).  Her proposals are not very detailed at this stage, but we expect they would include President Obama’s Greenbook proposals to restrict grantor trusts.  She has yet to support President Obama’s proposal to reduce the corporate tax rate to 28%, but will likely be more specific on her tax policy platform as the Democrat Convention opens.
We continue to monitor very closely the anticipated release of regulations under Section 2704. Catherine Hughes, an estate and gift tax adviser at the Treasury’s Office of Tax Policy, announced this week that guidance on qualified contingencies for charitable remainder annuity trusts will be issued very soon; however, there have been no further updates on the timing of Section 2704 guidance.