Impact of 2016 Elections on GRATs and Estate Tax 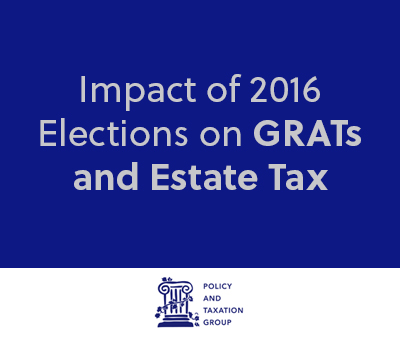 The results of the 2016 presidential and congressional races could hold significant sway over the future use of grantor-retained annuity trusts (GRATs) while simultaneously impacting estate and gift taxes.

If presumed Democratic nominee Hillary Clinton wins the general election, PATG anticipates that many of her policies will be in line with the current budget proposals of the Obama administration. Similar to the Obama administration, Clinton has expressed a desire to restore the parameters that were in place in 2009, reducing the estate tax exemption threshold to $3.5 million with no adjustment for future inflation and increasing the top tax rate from 40 percent today to 45 percent.

Likewise, when it comes to GRATs, we could expect a Clinton administration to call for a required minimum term for GRATs. The most recent Obama budget plan required that a GRAT have a minimum term of 10 years and a maximum term of life expectancy of the annuitant plus 10 years, while also requiring that the remaining interest in the GRAT at the time the interest is created have a minimum value equal to the greater of 25 percent of the value of the assets contributed to the GRAT. This would effectively end the usefulness of GRATs if the gift must be at least 25 percent of the initial value. Conversely, Donald Trump’s tax plan involves repealing the estate, which is also in line with removing restrictions on GRATs.

The actual inaction of such proposals from a Clinton administration depend more on the results of the congressional elections. Unless this election cycle results in a complete Democratic-controlled government, it remains unlikely that these proposed changes would take effect. While Republicans are in a tough position to maintain the Senate, defending 24 of 34 seats up in 2016, it would be difficult for Democrats to flip the 30 seats in the House necessary to win control of the chamber, making it unlikely that complete Democratic control of government will occur.