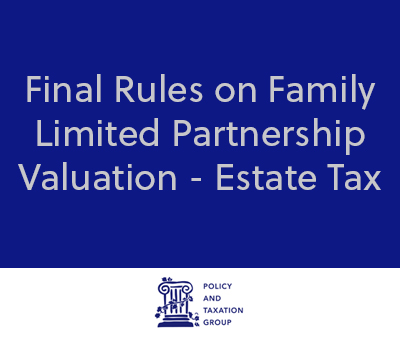 During an address to the American Bar Association Taxation Section over the weekend, Melissa C. Liquerman, Branch Chief within the IRS Office of the Chief Counsel, acknowledged that long awaited regulatory guidance under Section 2704 addressing family-owned business and family limited partnerships could be released within the next six to eight weeks.
Liquerman said “highly anticipated” final guidance on Section 2704, which addresses family-owned business and family limited partnerships, will be among the regulations released.
“We really expect those out very, very shortly,” she said.
She said final regulations on Section 1022 are also close to complete. Proposed regulations were issued last May and the IRS received “very few comments,” so the final version will show little change, Liquerman said. The regulations provide guidance for recipients of property with a decedent dying after Dec. 31, 2009.
Other incoming regulations center on charitable managed trusts, claims against an estate and treatment of trusts and retirement accounts. Liquerman said some of the final guidance could come as soon as the next two weeks.