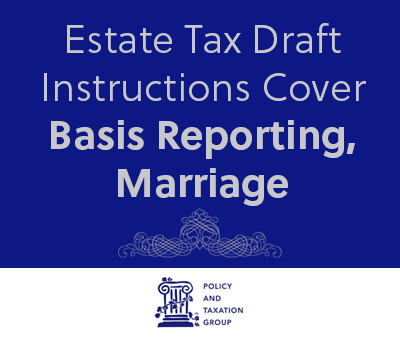 The IRS has recently released a draft of instructions for Form 706 concerning estates of decedents who died after Dec. 31, 2015. These draft instructions include reminders on consistent basis reporting, new estate tax exemption value and treatment of same-sex couples.
The draft instructions for Form 706, United States Estate (and Generation-Skipping Transfer) Tax Return, include the new indexed amounts for 2016: the estate tax exclusion at $5.45 million, the ceiling on special-use valuation at $1.11 million, and the amount used to compute the 2% portion of estate tax payable in installments at $1.48 million.
Under consistent basis reporting, the draft reminds taxpayers that any estate required to file Form 706 under 6018(a) or 6018(b) must also file Form 8971, Information Regarding Beneficiaries Acquiring Property From a Decedent, to satisfy the new consistent basis reporting requirement. This serves as an important reminder for executors to report basis claimed on the estate tax return and provide that basis to the beneficiaries of the estate.
The draft instructions also include a reminder on the treatment of same-sex couples: for federal tax purposes, marriages of couples of the same sex are treated the same as marriages of couples of the opposite sex. This provision is noteworthy for estate planners because it means that same-sex couples can now qualify for the marital deduction.
The draft adds that those federal tax benefits don’t extend to individuals who have entered into a registered domestic partnership, civil union, or other similar relationship that isn’t considered a marriage under state law.
Additionally, the draft instructions note that final regulations regarding portability of the deceased spousal unused exclusion (DSUE) amount published in June 2015 are effective for dates of death and gifts on or after June 12, 2015.
Additionally, effective for estate tax returns filed on or after June 1, 2015, closing letters won’t be automatically issued unless requested by the executor of the estate or the designated power of attorney.