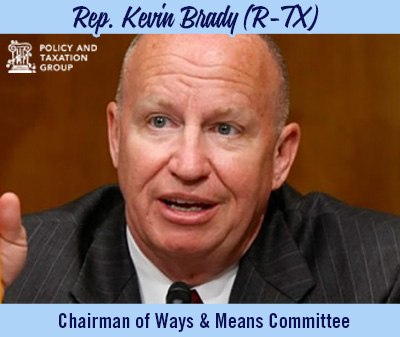 Policy and Taxation Group is excited to announce that Rep. Kevin Brady (R-TX) has just officially been announced as the next chairman of the Ways and Means Committee. Rep. Brady is a true champion of the estate tax repeal effort and the author of this year’s estate tax repeal bill, which passed in the House of Representatives in April. Rep. Brady will replace former Chairman Paul Ryan (R-WI), who stepped down last week after being elected Speaker of the House. PATG’s close relationship with the new chairman will allow us to continue making estate tax repeal a priority for the Ways and Means Committee moving forward.