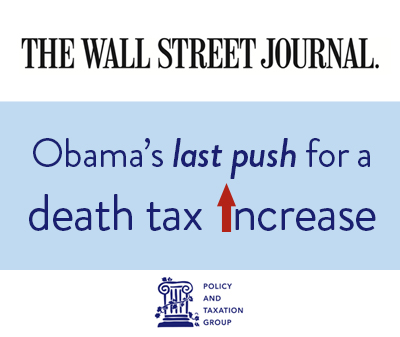 OPINION  REVIEW & OUTLOOK
A Stealth Death Tax Increase
Treasury again rewrites longstanding interpretations of law
Sept. 5, 2016 6:46 p.m. ET
In Print, September 6, 2016, p. A-14
January 20 cannot come soon enough for the owners of family businesses. Less than five months before President Obama leaves office, his Treasury Department is rushing to implement a de facto increase in the federal estate tax.
Since Congress does not agree that the Internal Revenue Service should suck more cash out of family firms, Treasury Secretary Jack Lew is up to his usual tricks, trashing established interpretations of tax law to bypass the legislative branch. Not even Mr. Lew has the gall to claim he can raise the federal death-tax rate of 40% without congressional approval. So the game here is to contrive ways to expose more of the value-or imagined value-of an estate to IRS revenue collectors.
Last month Mr. Lew’s Treasury announced a proposed rule to close what it calls an estate and gift tax “loophole.” Until now, the IRS permitted realistic values for portions of closely held corporations and partnerships.
For example, consider a minority stake with limited rights in a family business. While the business as a whole may have considerable value, how much would an investor be willing to pay for a small, illiquid piece of a private business that she can’t control? The typical answer is not much. On the other hand, the investor might pay handsomely for a controlling interest.
The IRS has long recognized this reality and has allowed the discounting of interests in closely held businesses to more closely reflect what they could fetch on the open market, rather than simply assigning a percentage of a firm’s overall estimated value. A lower value assigned to an asset means a smaller tax bite.
But what seems like a reasonable interpretation to some looks like a wasted revenue opportunity to the Obama Treasury. So the feds are now accepting public comments on a plan to limit discounting and thereby raise the official value of many of these stakes in family firms, exposing them to higher tax bills. Treasury is hoping to roll out a final rule before Mr. Obama departs in January.
As always, Mr. Lew and Treasury are happy to seize more wealth from the private economy. But estate-tax revenues, which will likely total around $21 billion this year, barely move the needle in a $4 trillion federal budget.
Beyond the money, the aims of Team Obama are political and ideological. A laudatory White House blog post doesn’t promise the plan will make the economy grow faster. It simply claims Treasury will stop wealthy people from avoiding payment of their “fair share.”
Since the tax only applies to estates above $5.45 million, many voters will figure that’s more than enough for anyone to inherit. It can’t be a coincidence that Hillary Clinton has chimed in to promote her plan to raise the estate tax to 45% and move the exemption down to $3.5 million. She’s drawing a contrast with Donald Trump’s proposal to end the estate tax and attacking him as self-interested. The Clintons for their part have housed a fortune in their family foundation, where it can remain useful to them without being subject to tax.
But voters may ask how much economic destruction is acceptable in the name of such fairness. The Tax Foundation notes that the estate tax is the rare federal tax “that falls entirely on investment income, a central determinant of the size of the economy.”
However you define fairness, the tax clearly encourages people to consume now rather than invest in the future. This means lower GDP over time and fewer opportunities for the poor, some of whom might want to work for family businesses. The Tax Foundation reckons that the economy would be 0.8% larger over a decade without the estate tax.
Should we accept a less prosperous society in return for the satisfaction of knowing we made it uneconomical for some people to pass businesses they built on to their kids? We’re guessing most voters won’t like that trade.