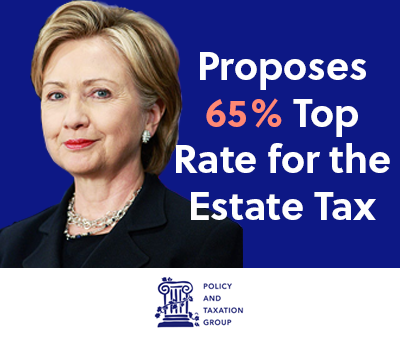 I would like to bring to your attention an article from the Wall Street Journal discussing Hillary Clinton’s proposals for increasing the estate tax.
In all, Mrs. Clinton would increase taxes by about $1.5 trillion over the next decade, increasing federal revenue by about 4%, though that new burden would be concentrated on relatively few households. There is at least a $6 trillion gap between her plan and the tax cuts proposed by her Republican rival Donald Trump.
The Clinton campaign changed its previous plan-which called for a 45% top rate-by adding three new tax brackets: a 50% rate that would apply to estates over $10 million per person, a 55% rate that starts at $50 million per person and that top rate, which would affect only those with assets exceeding $500 million for a single person and $1 billion for married couples.
The 65% estate-tax rate would be the highest since 1981 and marks one of the most enormous tax-policy gulfs between Mrs. Clinton and Mr. Trump, who would repeal the tax.
Click here to read the full story.