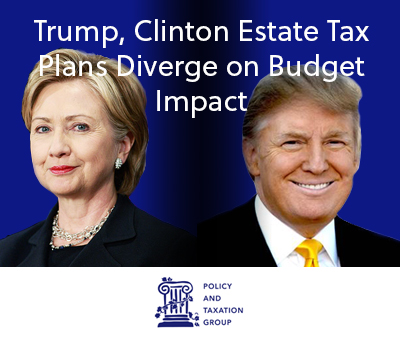 According to a recent study published by the Tax Foundation, presumptive Republican presidential nominee Donald Trump’s estate tax proposal would encourage economic growth, but also reduce tax revenue by billions of dollars.
The group said that even though his plan would decrease federal revenue by $240 billion over a 10-year period, elimination of the estate tax would increase capital investment in the economy by 2.3 percent and boost productivity by 0.7 percent by reallocating economic production from consumption goods to capital goods. The report also said his plan would increase labor force participation by 159,000 jobs.
Meanwhile, the foundation said Hillary Clinton’s plan to restore the estate tax to 2009 parameters-an exemption of $3.5 million and tax rate of 45 percent-would increase revenues by $107 billion over 10 years. However, the report said her plan would reduce capital investment in the economy by 0.3 percent, reduce productivity by 0.1 percent and reduce labor force participation by 14,000 full-time jobs.
“After considering the macroeconomic impact, and its effects on other taxes, the total revenue increase from the proposal would be only $82 billion over 10 years,” the study stated.
Estimates of revenue increase include revenue gained from Clinton’s proposals to require consistency between valuations for estate and gift tax and income tax purposes, in addition to revising rules applying to grantor trusts.
Those provisions mirror proposals set forth in the Obama administration’s fiscal year 2017 budget proposals.